How travel helped me face fears, find peace after my sister’s death

Meeting up with old friends, and making new ones, on a return trip to Indonesia.

Sarah Weaver works on a comic from a rooftop in Sri Lanka.

A hot air balloon ride in Lithuania helped Sarah Weaver conquer her fear of heights. She’s pictured with her husband.

In this January 2010 photo provided by the Daily Inter Lake, Melissa Weaver is shown. Authorities were searching Monday June 28, 2010 for a single-engine airplane carrying four people, including two Montana newspaper reporters Weaver and Erika Hoefer, that took off on a sightseeing tour the day before and did not return. (AP Photo/Daily Inter Lake)

Editor’s note: Melissa Weaver, 23, and Erika Hoefer, 27, were reporters at the Daily Inter Lake when they and two Missoula men, Brian Williams and Sonny Kless, died when their small plane crashed 10 years ago, on June 27, 2010, in rugged terrain southwest of the National Bison Range near Moiese while the four were on a sightseeing flight.

Both Melissa and Erika joined the Inter Lake newsroom in December 2009. Melissa, of Billings, came to the Inter Lake straight from graduating from the University of Montana’s School of Journalism. She covered the law enforcement and court beats. Erika, a Wisconsin native, had worked as a reporter at the Beloit Daily News, in Beloit, Wisconsin. She was the Inter Lake’s business reporter.

The Inter Lake is publishing this piece written by Melissa’s sister, Sarah Weaver, as a remembrance of the 10th anniversary of their deaths.

“We should order pizza.”

We were in Montana on the side of I-90. Waiting for a tow truck. In the snow.

“I don’t think they deliver pizza to the side of interstate,” I said.

“We won’t know until we call,” my sister said.

To my sister Melissa, everything was an adventure. Car breaks down? Opportunity to see if we can get pizza delivered roadside. While I watched from the car, my sister hopped a fence and met the pizza guy in a random field. Nothing tastes as good as hot pizza when you’re waiting for a tow truck in the snow.

Melissa was the one who taught me how to see the world, in the way only an older sibling can. She taught me to make cookie dough. To use my imagination. To catch a fish.

I’ve always wanted to change the world and be brave. But I’ve always been afraid. Melissa showed me how to see the world in a positive way—to view life’s difficulties like they were challenges, puzzles to be solved, rather than roadblocks.

In early 2010, Melissa was planning an adventure to Australia. It would be her first big international trip. She called me to relay her Australia plans—and also, unrelated but sort of related, to discuss the new animated film “UP,” which she’d connected with deeply.

She said, “The first 10 minutes of the movie are the saddest! Ellie wants to go on a big adventure, but she dies before it happens.”

A few months later, before her trip to Australia, Melissa went on a sight-seeing flight over Western Montana with some friends. The plane went missing.

At the time, I was living and working in London. Her plane went missing around the time of Wimbledon, which I had already had tickets to attend. I had no idea what to do. Sitting around and not knowing the future was agony. I decided to go to Wimbledon in the evening after missing most of the matches.

Later, I got the call that search parties had found the plane. No one survived the crash.

The suddenness of losing Melissa hit me like a train. How could I ever see her death as anything other than a roadblock? How could I learn to see it as a “This-sucks-but-let’s-order-some-pizza” type scenario, like she taught me?

I calculated, and the moment she took her last breath, I was asleep. I don’t remember stirring once during the night. I hate myself for not knowing she was dying.

Losing her changed our family dynamics. It made me the oldest sibling. In the years following her death, I began putting my stories into a webcomic — “Adventures With Vrah.” The first comic I wrote, Oldest sister found dead; real tragedy occurs when middle sister assumes leadership role, highlights the fundamental difficulty of that change, which altered me forever.

When Melissa died, I forgot many of the things she had taught me. I kept thinking that like Ellie in “UP,” Melissa died before she could achieve what she so desperately sought: adventure. The thoughts were depressing and uninspiring.

But there were moments following her death when I felt inspired, like when my husband and I visited Indonesia and saw the Komodo dragons.

In Indonesia, we sailed for three days, sleeping on the deck, from Lombok to Komodo to see the dragons

I knew I had to engage more in moments like those. After some serious planning, my husband and I sold many of our belongings, quit our jobs, and went on a trip around the world. We traveled for over two years, visiting 45 countries on six continents.

During this time, I worked on “Adventures With Vrah,” sharing comics about my sister. I felt closer to her than I had in a long time.

I hiked the Gertrude Saddle after learning about it from another traveler at our campsite. I connected with my new friend over talk of travels, loss, and relationships. Seven months later, we visited her in Switzerland.

When we visited New Zealand, we hiked and camped our way through the South Island. I always felt close to Melissa when I spent time in the mountains, but I hadn’t realized just how healing it was in losing a loved one until I stood on top of the Gertrude Saddle. Impressive views make me feel small, and remind me I’m part of something larger. This makes me feel empowered to heal.

In the past, I may not have spoken to a random person at a campsite. Losing a loved one opened my eyes to how much we have in common with one another as human beings. Engaging deeply with people while traveling has helped me discover amazing places in our world, and allowed beautiful friendships to blossom.

Acknowledging that the human experience is shared reminds us that we aren’t alone in the world. Everyone experiences pain and loss, and happiness and fulfillment. Remembering this helps me keep my life in perspective.

I thought of my sister in South Africa, Namibia and Swaziland (now The Kingdom of eSwatini) when we rented a car and did a series of self-drive safaris. I often think of Melissa when I do something for the first time. Watching wildlife gives me the same feelings I experience in the mountains. The beauty and grandeur help my mind stop racing. I feel present and at peace.

In Alaska, I fished a salmon run. It was my first time fishing for salmon, and we shared the river with the eagles and grizzly bears.

It was a flurry of emotions, trying to remain vigilant and respectful of the bears while fishing. At one point, I looked up from a cast and saw an eagle fishing on the opposite bank. A grizzly was fishing to my right.

There we were: living beings, vibrantly alive, going after the same thing. I’ll never forgot how intensely present I felt in that moment.

I’m not saying I literally hear my sister’s voice or feel her presence. I don’t. (I wrote a comic about the feeling of disconnectedness after death. It’s been devastating in all kinds of ways.) What I mean is, in moments when I’m fully present, I remember her. It makes me, and my memory of my sister, feel limitless.

For Melissa, and because of Melissa, I try to try harder. I know peace is possible. But it requires that I try. I struggle, even when I’m trying.

Part of trying is facing things that make me feel afraid, like when I returned to Western Montana. I hiked in Glacier National Park, a highlight of my sister’s last flight.

Instead of embracing the sadness, I tried to focus on the beauty of Glacier. How lucky that this gorgeous place is one of the last she saw.

In Lithuania, I faced another fear: flying. I went on a hot air balloon ride. I got in the basket, preparing to feel out of control.

Instead, the speed with which the balloon took flight and the heat blast from the flame electrified me. I thought about Melissa and “UP.” I wonder: does she know I went on the flight?

Slowly, I’ve learned to manage my fear of flying. I will not say overcome, because I think I will always be susceptible to the fear because my sister died in a plane crash.

I started to feel panicky, because flying scares me, I was super tired, and I didn’t want to be in an episode of the “Twilight Zone.”

Then the flight attendant started to give the safety presentation for his audience of two. He didn’t know where to look, and neither did we. We all ended up smiling.

I faced fear again when we finally visited Australia. I avoided going to Australia for a long time because the country made me think about what my sister didn’t do in her life.

We visited Australia during the Australian Open, and I hadn’t been to a major tennis tournament since Wimbledon when my sister’s plane was missing. Visiting Australia was a double-whammy of emotions.

At the Australian Open in Melbourne, Australia. I treated myself to ice cream (twice) to congratulate myself for facing something that made me feel afraid.

After the flood of feelings in Australia, I gained a certain level of confidence, even pride. I faced a fear by openly going to an event (and visiting a country) that I knew would trigger a painful associated memory. The next time will be easier.

In 2.5 years of travel, I’ve discovered the healing power of being fully engaged in moments. Healing begins with a willingness to adapt and an effort to adjust our expectations. Whether you find yourself in a hot air balloon, or stranded on the side of a highway, adventures are created by attitude and intent, at home and abroad.

Though she never visited Australia, my sister had adventures in the middle of an ordinary life.

We all have that power within us.

Sarah Weaver is an artist, writer and traveler. In the years following her sister’s death in a plane crash, she and her husband traveled the world for 2.5 years, visiting 40+ countries on 6 continents. You can find Sarah’s comics at “Adventures With Vrah” or Instagram or Facebook.

Meeting up with old friends, and making new ones, on a return trip to Indonesia.

Sarah Weaver works on a comic from a rooftop in Sri Lanka.

A hot air balloon ride in Lithuania helped Sarah Weaver conquer her fear of heights. She’s pictured with her husband. 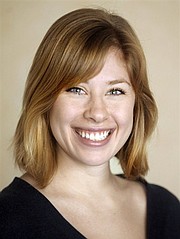 In this January 2010 photo provided by the Daily Inter Lake, Melissa Weaver is shown. Authorities were searching Monday June 28, 2010 for a single-engine airplane carrying four people, including two Montana newspaper reporters Weaver and Erika Hoefer, that took off on a sightseeing tour the day before and did not return. (AP Photo/Daily Inter Lake)