An empty space where a Ten Commandments monument used to stand at the main Flathead County Courthouse at 800 S. Main St., in Kalispell on Sunday, June 28. The granite monument was allegedly taken down by a Columbia Falls man who wrapped a chain around it and dragged it to the street with his truck on Saturday, June 27. The granite monuments left standing commemorate the U.S. and Montana constitutions, Declaration of Independence, U.S. Bill of Rights, Mayflower Compact and the Magna Carta. (Scott Shindledecker/Daily Inter Lake)

A Columbia Falls man was arrested after he reportedly toppled a Ten Commandments monument located on the southwest side of the historic Flathead County Courthouse in Kalispell.

According to the Kalispell Police Department, 30-year-old Anthony Craig Weimer reportedly wrapped a chain around the granite monument, attached it to his truck and was seen dragging it across the lawn into the street.

The man then reportedly removed the chain and drove away according to Kalispell Police Department Patrol Sergeant Chad Fetveit.

According to a 2003 report by the Associated Press, Weimer was one of three Kalispell boys charged in youth court on allegations of arson, vandalism and a string of thefts. 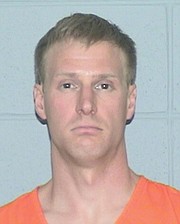