A water bottle refilling station and fountain at Kalispell Middle School is shown in this photo illustration. Montana schools have until December 2021 to test drinking water for lead. (Casey Kreider/Daily Inter Lake)

Schools are required to test all fixtures that may “reasonably provide water for human consumption or for food preparation,” such as drinking fountains, water bottle refill stations and sinks.

Schools may begin testing as early as March and have a December 2021 deadline. Results will be made public online as they become available, according to Greg Montgomery, the lead in school drinking water rule manager for the Montana Department of Environmental Quality. He also heads the new Lead Reduction in Drinking Water program.

The Montana Department of Public Health and Human Services adopted revisions to the Administrative Rules of Montana related to school health in January. Other revisions also addressed items such as indoor and outdoor air quality to help schools plan if air quality deteriorates.

The rules haven’t been updated since 1986, the year the federal Safe Drinking Water Act was amended.

The amount of lead allowed in a school water fixture that doesn’t require remediation or additional monitoring is below 5 parts per billion (ppb). Schools will test once every three years, or submit requests for an alternative schedule.

However, the Environmental Protection Agency and Centers for Disease Control and Prevention agree that “no safe blood lead level in children has been identified,” and even a “low level” of lead in a child’s blood could lead to behavior, learning, IQ, growth, hearing and hyperactivity issues.

Due to the impact on children’s health and the absence of laws for lead testing in schools’ drinking water, Montana set the 5 ppb threshold taking into account detection limits and accuracy. The testing method used to determine how much lead is in the water is not reliably accurate below 5 ppb, according to the state Department of Environmental Quality.

Remediation and follow-up sampling is required for water fixtures where lead concentration levels are 5 ppb up to 15 ppb. Schools can continue using the fixture until remediation, but only if it is flushed daily. If concentration levels exceed 15 parts per billion the fixture mush be immediately removed or disconnected and remediation and re-sampling must occur before people can use it.

The question now is how schools will fund testing and remediation.

A $192,000 EPA grant is expected to cover costs for the first round of testing in public schools only, according to the Montana Department of Environmental Quality.

“We’re hoping that will cover the cost,” Montgomery said, using a cost estimate between $12 and $20 per sample.

If funding runs out, Montgomery said there is potential for a third year of funding “if Congress allocates it.”

Funding will not be used for remediation, but the Department of Environmental Quality and partner organizations are looking at other resources to help schools find funding.

“Again, we don’t know how big of an issue this will be across schools,” Montgomery said about the extent of possible remediation. “The cheapest form of remediation would be disconnecting drinking fountains and schools can also do a flushing program for that fixture.”

While there are a total of 823 schools in Montana, that number does not translate to the actual number of individual buildings. There could be separate buildings for elementary, middle and high school grades, but that is not always the case in rural areas where a school district may have different grade configurations housed in one or two buildings. Additionally, school districts may have other buildings that need to be tested, such as a administrative and transportation offices or a central kitchen.

For a large Class AA district such as Kalispell Public Schools, there are at least 14 buildings to be tested — a significant undertaking ,according to Kalispell Superintendent Mark Flatau. Flatau said the plan is to hire a certified water operator to conduct tests over the next two summers. He estimates testing may cost $18,500.

The district began looking at the financial impact to test its buildings following parent concerns in October 2018, and set a tentative testing schedule in 2019, but held off because state rule revisions got underway.

Hiring a professional may not be financially feasible in smaller districts where an administrator or staff member likely will take on the responsibility, which may also be burdensome to positions that typically cover a variety of roles.

“We put together a website for this program and we’re providing guidance documents for schools to use — everything on how to collect samples, read data, to creating flushing programs, to what do if you have an exceedance,” Montgomery said. “Collecting samples is a relatively simple process.”

Dylan Klapmeier, Office of Public Instruction director of communications, said the state is working to remove as much of the administrative and implementation burden as possible, but he has received feedback that schools fear it will become another unfunded mandate.

Klapmeier said initially the Office of Public Instruction and other educator associations initially were not at the table when the revisions were being drafted, which was expressed during a public comment period last summer.

“We expressed concern that the rules were punitive and it was an unrealistic timeline for implementation and a little too comprehensive for some of our most rural schools,” Klapmeier said, such as the ability for schools to be given citations.

Klapmeier said the department has since pulled back on punitive measures and the Office of Public Instruction has since been very involved in the process.

Testing drinking water for lead was previously voluntary for Montana schools that received water from regulated public water systems, which are tested regularly, however, it may not be an adequate assessment of lead in individual buildings, retired Montana Department of Environmental Quality Public Supply Bureau Chief Jon Dilliard said in a March 2019 Daily Inter Lake article.

Dilliard said the presence of lead in drinking water is primarily an internal plumbing issue. What testing a municipal drinking supply shows is how corrosive water is, which can change over time. If water is corrosive and it sits in plumbing with lead solder, for example, lead may leach into the water. The chance of this occurring in new construction materials is minimal. 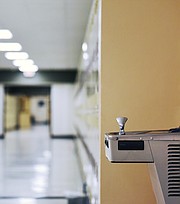