An image of Mary is depicted in a new mosaic at St. Matthew's Catholic Church. The mosaic is from Lebanon. (Casey Kreider/Daily Inter Lake)

The renovated downstairs features a sitting area with a livestream of the proceedings during Mass at St. Matthew's Catholic Church in Kalispell on Saturday, Nov. 21. (Casey Kreider/Daily Inter Lake)

Today marks a new beginning for St. Matthew’s Catholic Church in Kalispell. It is the start of the new liturgical year in the recently renovated church, which was damaged in a fire last year.

Although the May 2019 fire, which started in the basement kitchen, was extinguished within about 30 minutes, the damage to the historic building was severe. The amount of smoke and fire damage took several months to remediate before construction could begin.

Last weekend was the first time worshippers returned to the church. Up to that point, Masses were held in St. Matthew’s School gymnasium.

The renovation, completed by Swank Enterprises, is a balance between familiar and new.

“People who have gone to the parish for a long time will walk in and recognize their church,” St. Matthew’s Deacon Charlie Harball said. “I think they’ll look at it and go, ‘this is so much brighter, nicer than it was before.’ It was important we retained much of its original beauty.”

Despite the unfortunate incident, there were many reasons to be thankful.

On the day of the fire, parishioner Bill Hensleigh was upstairs praying when he noticed smoke from an open stained glass window and alerted someone to call 911. Firefighters swiftly arrived and contained the blaze to the basement. No one else was inside the church at the time and no injuries were reported.

“At the end of the fire, you know, that night, [Kalispell Fire Department] Chief [Dave] Dedman said to me, he said, ‘There’s two miracles that took place,’” said the Rev. Rod Ermatinger. “‘One, is the church was minutes before being consumed by fire.’ So, thanks be to God’s grace, to the firefighters for their courage and professionalism, they saved this church. The other miracle is, he said, ‘Firefighters like to break windows,’ and they didn’t touch our stained glass windows, which are treasures.”

From outside, the rich colors of the stained glass firefighters worked to preserve appear more vibrant. This is because old protective covers that had developed a film over the decades were replaced.

“You couldn’t even see the stained glass from the outside,” said parishioner Ken Parker. “With the addition of the new coverings on the outside, cleaning the windows and getting the fire residue off, the colors just absolutely jumped out.”

Parker worked closely on the project, overseeing finances and the church’s ReNew campaign to raise funds to cover projects not covered by insurance such as a new roof, exterior paint and replacement of the parking lot, sidewalks and landscaping, which will start in the spring. To date, $1.1 million of a $1.5 million goal has been raised.

In total, remediation, reconstruction and the parking lot and sidewalk projects will bring the cost to nearly $3 million.

THE DOUBLE doors of the church entrance — once opened by firefighters to increase ventilation of the acrid smoke — now provide entry into an airy sanctuary.

In the entryway, Ermatinger, Harball, Parker and parishioner Monda Zorn, who served as a design consultant, stood on a new tiled floor, waiting to give a tour of the building.

“There were so many things we were able to fix and mend and take care of,” Zorn said about the church, which was built in 1910 and dedicated in 1911.

The church went through a remodel in 1938 after a fire that also started in the basement and destroyed an ornate wood altar in the sanctuary. In the 1950s, the basement was remodeled into a space for people to gather, but since then the building has largely remained unchanged, according to saintmatthewskalispell.org.

The renovation helped bring the church up to code and improved handicap accessibility with the installation of an elevator and wheelchair-accessible restrooms. A space for wheelchairs also has been designated in front of the new pews.

To bring continuity and brightness throughout the building, soft colors and a plaster treatment in the style of European cathedrals was chosen for the walls, Zorn said. Custom embellished molding now frames the sanctuary arch and statues of Mary and Joseph.

“For me, I wanted the beauty to be there for them when they came back,” Zorn said once the church reopened after holding services in a gym for so long.

ONCE THE charred remains of the downstairs were gutted, a clean slate offered an opportunity to reimagine the area into a more inviting space for fellowship, prayer and overflow seating during Mass.

Removal of the boiler, which was replaced with a radiant floor heating system, provided more square footage to work with and a chapel was built in addition to a kitchen and serving area. Instead of a stove, staff opted to install warming drawers instead and have people use the school kitchen if food ever needs to be cooked on-site.

“Once things return to normal with COVID-19, the church plans to use the area for hospitality such as coffee and doughnuts after Mass,” Ermatinger said.

The restrooms were also a significant improvement, Zorn and Harball said.

“If you’ve ever had the wonderful experience of being in the bathrooms here, before, they were like an afterthought. Like let’s dig a hole inside of the church and call it a bathroom,” Harball said jokingly.

A stained glass window that was previously located in the upstairs confessional was relocated to a more prominent place on a wall of the new chapel, where finishing touches are still underway.

“Because of the changes downstairs, we’re going to have more time for adoration before the blessed sacrament of the Holy Eucharist,” Harball said.

Another prominent feature is a mosaic of Mary praying the Rosary located off the stairs. It is one of two mosaics from Lebanon, Zorn said.

“I think one concept that is really important is that this is a temple of God, and so here, heaven touches earth. Everything here is meant to be on a different plane than outside these walls,” Ermatinger said. “Anything in the church speaks to the mysteries of our faith.”

Harball echoed a similar sentiment, describing the church as a peaceful place where people can seek refuge.

“One thing we’re so excited about — with everything else that’s going on in the world — is getting in here and creating a healing space for people. People need that right now.”

Due to the COVID-19 pandemic, a rededication ceremony has been postponed until the situation improves.

Reporter Hilary Matheson may be reached at 758-4431 or by email at hmatheson@dailyinterlake.com

The renovated downstairs features a sitting area with a livestream of the proceedings during Mass at St. Matthew's Catholic Church in Kalispell on Saturday, Nov. 21. (Casey Kreider/Daily Inter Lake) 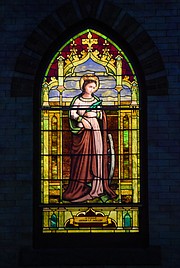 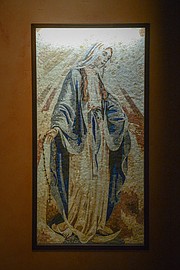 An image of Mary is depicted in a new mosaic at St. Matthew's Catholic Church. The mosaic is from Lebanon. (Casey Kreider/Daily Inter Lake) 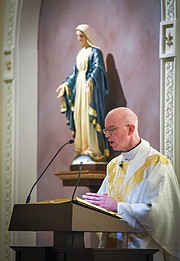