A collector with more than 3,000 license plates from across the U.S. and beyond, Kalispell's Ken Fitzgerald recently published a book on the history of Montana's license plates. (Jeremy Weber/Daily Inter Lake)

Ken Fitzgerald's license plate collection includes plates from all 50 states as well as the District of Columbia and even some foreign plates. (Jeremy Weber/Daily Inter Lake)

When Kalispell’s Ken Fitzgerald first began collecting license plates more than 15 years ago, he had no idea the hobby would become one of the driving forces of his life in retirement.

These days, Fitzgerald’s collection of more than 3,000 license plates fills his garage and features examples from all 50 states and the District of Columbia as well as several foreign specimens. It includes Montana plates from as far back as 1914 and examples of nearly every Montana specialty plate ever produced.

With his new book, “Montana License Plates,” Fitzgerald is hoping to share his love of license plates, and their history, with others.

“My biggest goal when I started all this was to let people know about the history of license plates in Montana. As I traveled around, I quickly found that nobody really knew a lot on the subject,” Fitzgerald said. “Hopefully, my book can help change that. I think that history is important and I tried to put as much information in my book as I could.”

Fitzgerald’s fascination with license plates began during his time working as a car salesman. When customers would trade in their old vehicles, Fitzgerald would always ask if he could keep the license plates that he found interesting. It did not take long for his collection to take off.

“I got to looking at the different ones that would come in and I thought they were pretty neat. I really liked them, so I started collecting them,” Fitzgerald recalled. “I started hanging them up in my garage and I pretty much filled the walls up. My wife wasn’t exactly excited about it, but I enjoyed it.”

When Fitzgerald moved to Idaho, his hobby moved with him. As he continued working in the car sales business in a new state, his collection expanded to Idaho plates, then across the U.S. and even international plates.

When Fizgerald came across a man who belonged to the Automobile License Plate Collectors Association, it wasn’t long before he became a member of the organization that boasts more than 3,000 members across the country. With a new network of like-minded hobbyists available to him, Fitzgerald’s collection continued to expand through new purchases and trades with other collectors.

“It just wasn’t enough for me anymore. I wanted to find something else to do, so I decided to write a book,” he said.

With his new goal in mind, Fitzgerald set to work, but the going was tough and progress was slow.

“I could hardly find any of the information I was looking for to be able to put together the kind of book I was wanting to write,” he said. “The Montana Historical Society was very supportive, but they had very little information for me.”

Everywhere he went, the story was the same. People were excited by the idea of the book Fitzgerald wanted to put together, but they could offer very little useful information.

So, Fitzgeald decided to go straight to the source.

A trip to the license plate factory at the Montana State Prison in Deer Lodge finally produced useful information. Subsequent visits and phone calls turned up even more tidbits of information and, after another research trip to the Piccadilly Museum of Transportation in Butte, the book finally began to take shape.

Fitzgerald turned up several pieces of useful information, learning that Montana started registering and taxing motor vehicles in 1913 and charging a fee of up to $20 based on horsepower. Half of the money went to the county and half to the state highway fund. Perhaps most interesting was the fact that those early car owners had the option to fashion their own plate or purchase a state-issued license plate for 50 cents.

Other interesting tidbits Fitzgerald discovered included the fact that Montana is one of only eight states to use numerical codes to display the county of origin on the standard issue plates and that, like most states, Montana does not use the letters I, O and Q, but also avoids using R and V.

Two years of research later, Fitzgerald was ready to take his idea to a publisher. A trip to Scott Publishing in Kalispell set the wheels in motion. The company thought Fitzgerald’s concept of a book about the history of Montana’s license plates was a great idea and agreed to publish it.

WHILE FITZGERALD was working to put the finishing touches on his book, he found another way to use his hobby. After learning from a friend that the Montana Highway Patrol’s Hope Project uses funds from recycling license plates to help raise money for sick children, Fitzgerald took up the task of using his connections to help collect license plates to raise money for the project. When he would gather enough plates, Fitzgerald would turn them in for recycling and donate the funds to the highway patrol.

“It’s worked out pretty well. Sometimes it can be a little slow collecting the plates, but I just keep at it,” he said. “I enjoy doing it and being able to give back is worth all the effort. I like being able to help the kids.”

When his book finally hit the shelves six weeks ago, the response was overwhelmingly positive, he said.

“Everyone I have talked with that bought my book has really enjoyed it,” he said. “I haven’t received a bad comment yet. It’s been great.”

With his goal of putting his first book together behind him, Fitzgerald said he will continue to check out the license plates on each trip to Walmart or Home Depot, always on the lookout for one he has never seen before.

“I’ll just keep adding to my collection and helping out the Hope Project,” he said.

“Montana License Plates” is available on Amazon, from Scott Publishing or by contacting Ken Fitzgerald at 406-270-5926 or by email at fitzgeraldken460@yahoo.com. 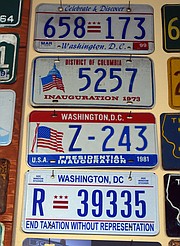 Ken Fitzgerald's license plate collection includes plates from all 50 states as well as the District of Columbia and even some foreign plates. (Jeremy Weber/Daily Inter Lake)