Clients at Posh Nails and Spa in Columbia Falls emerge with their nails almost unrecognizable from when they first stepped in the door, much the same way the business itself has transformed its little corner of Nucleus Avenue.

Johnny Truong and Judy Pham bought the building on the north end of Columbia Falls’ main street in October 2020, and by Nov. 17 they were up and running in a totally transformed space.

The shiny tiles, sparkling modern light fixtures and state-of-the-art massage chairs with metallic rainbow bowls are a physical embodiment of the experience and work ethic the salon’s owners bring to their new business.

“We definitely put in the work for this building,” said Truong as he surveyed the handiwork done entirely by the owners and their families. The long-vacant space, which sat empty for months after plans to put in an apothecary never came to fruition, has quickly evolved into something, well, posh.

Both Truong and Pham cut their teeth working in salons with their families in Las Vegas, and that heritage is apparent at their new Flathead Valley location. At Posh they want to keep some of the finer elements from that cosmopolitan background, but they’re also committed to striking a balance between big city and small town.

The couple moved to the Flathead Valley four years ago in search of a quieter, more family-friendly lifestyle. “We got tired of living there. It was too busy,” Pham recalled. “We wanted a family.”

Originally, they planned on working seasonally for one summer at a Kalispell salon, but once they got to Northwest Montana, they never left. The pair traveled around, trying their hands at different salons from Whitefish and Kalispell down to Polson and Missoula.

As they hopped around, they noticed a steady stream of clients coming to the spas from Columbia Falls. It seemed like an obvious place where they could fill a need for a full-service salon.

Truong and Pham were so committed to putting down roots in C-Falls, they drove up every weekend from Polson to scope out potential properties. Finally, they came across the small building next to Glacier Lanes, and the paint was barely dry on the walls before they started painting nails inside.

Even though the pair was eager to branch out to their own salon, they said they’re grateful for the experience they gained from four years working at other spas around the valley. “Every salon we worked at, we learned from them,” said Pham.

Now in their own space, Pham and Truong are taking the lessons they learned from their colleagues and pairing that knowledge with their own unique preferences.

WHAT REALLY sets Posh apart, they said, is their specialty pedicures. The salon features six unique sets of sugar scrubs and mud masks in enticing flavors such as raspberry mimosa and creamy avocado.

“Our pedicures are on a different level with everything we include in them,” said Pham. “People are amazed this is in C-Falls.”

And that’s exactly the reaction she’s going for. Pham said one of her top priorities is keeping up with the newest nail trends, especially those debuting in big urban areas, and bringing up-and-coming ideas to the Flathead Valley.

Lately, she said, the hottest thing is dipping powder, an alternative to traditional painting that is purported to last longer than regular paint and work better for people with allergies or other sensitivities. Posh features hundreds of dipping powder varieties so locals can get their fix of the growing trend.

And whatever comes down the line after dipping powder, Pham is determined to incorporate that at the salon, too. “We follow the trends, so if there’s something new, we’ll take it on and learn how to do it,” she promised.

Neither she nor Truong expect to have any trouble finding qualified technicians, either. They hired four technicians for the salon’s opening in November, but this summer they expect to triple their workforce. They have plenty of eager workers to draw on from their respective families back home in Nevada.

“There are a lot of people in both of our families on call to come,” Truong said. He’s confident he and Pham have only started to dip a finger into the possibilities at Posh.

Posh Nails and Spa is located at 303 Nucleus Ave., Columbia Falls. Hours are 10 a.m. to 6 p.m., Monday through Saturday. 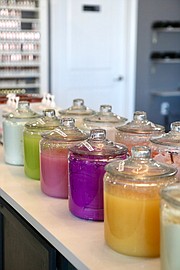