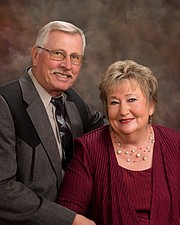 David and Linda Peterson of Lakeside celebrated their 50th wedding anniversary recently in conjunction with a family reunion numbering 85 and hosted by their children at the Edgewater Resort in Lakeside.

The couple were married Aug. 16, 1968, at First Lutheran Church in Lignite, North Dakota.

David served in the U.S. Army from 1966 to 1969, including 18 months in Korea. He was an air traffic control specialist, which he continued with the FAA until 1980. After moving to Kalispell, he worked in the maintenance department at Kalispell Regional Hospital from 1981 to 1995, and then farmed on the family farm in North Dakota until retirement in 2010, still keeping property in Montana. Linda worked in retail in the Flathead Valley from 1987 to 1996. After retirement they moved near Lakeside, wintering in Arizona. Their children were raised and educated in the Flathead Valley.

They have a daughter, Heather and Mark Siderius of Kalispell, and son, Justin Peterson and Katy Shewmaker of Sagle, Idaho.

The Petersons have six grandchildren and one great-grandchild.