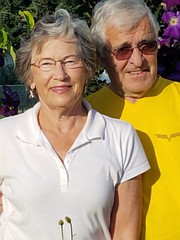 Mike (LTC, Retired) and Jenny La Sorte celebrated their 50th wedding anniversary with a trip to visit family and friends, and a week-long stay at a resort in the Texas Hill country.

The couple were married July 27, 1968, at the First Presbyterian Church in Cut Bank. Mike completed officer and helicopter pilot training for the Army. Both Mike and Jenny attended the University of Montana, and Jenny graduated from Montana State University-Billings with a degree in education. Mike completed his degree in management and finance by correspondence during military training. In Missoula, Mike was scholarship and financial aids officer at UM, and Jenny was administrative assistant to the academic vice president. Mike took a job with the Minnesota National Guard in Duluth, Minnesota, and then had active Guard tours, including Germany and the Pentagon. Jenny earned a degree in music-vocal performance from University of Wisconsin-Superior, and worked as a teacher and executive assistant. Among other groups, she has sung with the Oratorio Society of Washington, D.C., and as a soloist in Germany.

The La Sortes have moved 19 times. At home in Kalispell, Mike golfs and flies his drone. Jenny plays tennis and sings with the Glacier Symphony Chorale, and they both volunteer.