Whitefish woman with Down syndrome models for awareness

Whitefish resident Cedar Vance has an electrifying, bubbly personality that can light up a stage — and often she does just that.

Vance opens her heart and mind up to everyone she meets, and having Down syndrome does not make her shy away from people. Because she loves any opportunity to dance freely and strike a pose in front of the camera, she was a natural at the virtual Be Beautiful Be Yourself model audition show recently held over a Zoom meeting.

This virtual event is a part of the large fundraiser fashion show held annually in Denver, hosted by the Global Down Syndrome Foundation. The show is held for people with Down syndrome to be self-advocates for awareness around the genetic disorder and to help raise money for research.

The foundation organized the virtual show to give an opportunity for all who applied to “walk the runway”, as they can only accommodate a certain number for models in the main event in Colorado on Oct. 3.

As the show began, Vance watched the computer screen as she awaited her turn to put her hand on her hip with a little attitude and show off her personalized moves in a ruffled, pink dress. With each name called, she would jump with anticipation. When it was finally her turn, she immediately began dancing and blowing kisses toward a screen full of smiling faces.

After her 30-second runway walk was up, she just wanted to keep dancing and later said she enjoyed participating.

For Vance, it was an occasion to put on a beautiful dress, curl her hair and dance to the beat of a fun song; but more importantly, it was a chance for her to see and connect with others who also have Down syndrome. Vance’s mother, Bobbi Hall, said she believes it is important for her daughter to see others who share the same traits and similar abilities to her.

“They just have that connection,” Hall explained. “I think it makes them feel like, ‘I’m not alone.’ I can’t positively say that, but just trying to put myself in that position I think there would be that connection.”

This was the first time Vance had participated in the modeling event, however, Vance has been competing in the Special Olympics for just over 20 years as she started at the age of 8. Over that time she has racked up 100-plus medals and was selected to compete in the 2017 Special Olympics World Winter Games in Austria. Vance competed in alpine skiing and earned a silver medal in the women’s alpine skiing advanced giant slalom event.

Although competition is a significant part of the Special Olympics, for athletes like Vance it is just more of a good time spent with like-minded people. Sherri Sadino, a longtime family friend who was Vance’s teacher during some of her earlier years and also a coach for the local Special Olympics program, explained Vance is an advanced skier who has skied alongside the Whitefish Mountain Resort Race Team.

“I think when she goes to the Special Olympics, it’s more about the friendship rather than competing,” Sadino said.

Hall added, “When they’re doing their sport they are competing in the moment, but once it’s over they’re cheering everybody else on. We all could learn so much just watching them because their sportsmanship is just outstanding.”

These events take her all over the United States and even internationally, and it helps the young competitor grow personally and further develop life skills. When Vance traveled to Austria for the World Games, she traveled on her own with a new, unfamiliar coach and team. Although this experience could be frightening for some, Vance was often caught on camera dancing, laughing and smiling during the television coverage.

Vance has an attitude about her, and works hard to be able to accomplish what she puts her mind toward. She doesn’t see herself as any different than anyone else and uses her outgoing personality to bring people together and make everyone feel comfortable.

Vance grew up and still lives on a horse ranch with her mother. She does her chores, makes mucking horse manure look fun and can lift a 70-pound bale of hay on her own. She practically grew up on the back of a horse and her mother attributes much of her developmental growth to her time spent on horses.

Hall explained when her daughter was born the doctors did not give her much hope for the future as they advised her to put Vance in an institution. But Hall questioned that and her mother’s intuition knew she could do better.

Hall runs a program that features equine assisted learning and therapy at her company, Stillwater Horse Whispers Ranch, near Whitefish. She said even just the movement from riding horses can act as therapy and crossfire neurons in the brain, she believes this same theory helped Vance develop physically and cognitively.

When thinking back on those concerning first moments with her baby girl, and since then watching her progress to the intelligent, beaming young woman she is today, Hall has “a lot of pride.”

“Just to see what an awesome person she has become when the first words I was told were that she wouldn’t amount to anything…” Hall added.

Reporter Whitney England may be reached at 758-4419 or wengland@dailyinterlake.com 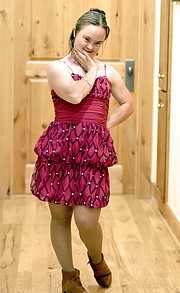 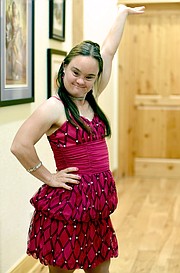 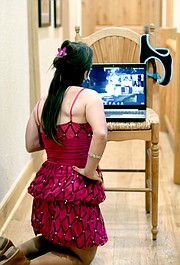