“Our girls played hard all three sets, got a little bit frazzled coming out but got it together,” Russell said. “Looking forward to our game Thursday against Sentinel.” 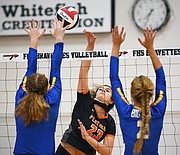