Flathead muzzleloading group more than a flash in the pan

Sean McQueen points out a target to Darryl Askvig during a gathering of the Flathead Muzzleloaders Association Saturday, Dec. 4. (Jeremy Weber/Daily Inter Lake)

Many of the flintlock rifles used by the members of the Flathead Muzzleloaders Association sport intricate designs and carvings. (Jeremy Weber/Daily Inter Lake)

Stephanie and Rod Douglas have been shooting muzzleloaders together since 2017. (Jeremy Weber/Daily Inter Lake)

A powder horn and bag sit draped atop a rifle as the members of the Flathead Muzzleloaders Association gather around the campfire for lunch near Columbia Falls Saturday, Dec. 4. (Jeremy Weber/Daily Inter Lake)

With their buckskin clothing, powder horns and flintlock rifles they take to the woods of the Flathead Valley.

For nearly 40 years, the members of the Flathead Muzzleloader Association have been spending the second Saturday of each month stepping back in time to the days of Jeremiah Johnson, John Colter and Jim Bridger and the mountain men of early Montana.

Gathered around a small fire in the driving snow, the close-knit group exchanges stories and a fair bit of good-natured ribbing before taking to the woods to engage a series of metal targets to hone their skills.

For more than three decades, the members of the group have found themselves coming back month after month to share in the passion that draws them together.

“I think a common love of history has a lot to do with it. That’s what gets us interested in the first place. The mountain man era really only lasted about 20 years, but these were the men who truly discovered the West. The first Rocky Mountain Rendezvous was in 1825 and the last was in 1840, so it’s a short period in history, but it is such an exciting and adventurous one that it still draws us in today,” Pennsylvania-born Gene Gordner said between bites of roasted bison heart around the campfire on Saturday. “It was an exciting time in history that involved some larger-than-life personalities and some really cool guns. Those people were bigtime badasses — some real rough and tough guys to look up to.”

Gordner’s mountain man lifestyle traces its roots back to his days with the Marine Corps in the early 1970s and the first time he saw the classic 1972 movie “Jeremiah Johnson.” Starring Robert Redford as the namesake character, the film was cited as inspiration by many standing around the campfire that morning.

“I think that movie planted the seed in my mind that when I got out of the Marines, I was going to go west and become a mountain man. I went as far west and as far north as I thought I could manage and I ended up in Montana,” Gordner said.

WHILE THE group does allow the use of percussion cap rifles, nearly all the shooters could be seen toting flintlocks on their shoulders as they made their way along the trail to the various shooting stations.

Using the spark of a small piece of flint stone striking a metal frizzen (a piece of steel on the priming pan lid) to ignite a small charge of black powder in the flashpan, a flintlock weapon is discharged when that charge ignites the power inside the gun’s barrel, propelling a lead projectile down range at speeds up to 1,800 feet per second.

A far cry from today’s modern bolt action and semi automatic rifles, flintlocks were nonetheless the height of military small arms from the early 1500s through the early to mid 19th century.

“For more than 200 years, the flintlocks were the pinnacle of firearms technology and people learned to live with their shortcomings, which was primarily the weather,” Gordner said. “Flintlock rifles use such an interesting, intricate and well-thought-out design, and that just fascinates me. I have percussion and bolt action rifles, but when I am shooting, you will usually find me with a flintlock.”

Garnder’s opinion was echoed by fellow group member Rod Douglas, as he carried a pre-revolutionary war style rifle on his shoulder.

“THE PACE is just so different than it is when you are shooting modern rifles,” he said. “You truly have to slow down and learn how to shoot. It’s hard to explain just how much fun we have shooting these types of rifle and the challenge of hunting with them.”

With the state's new week-long Heritage Hunting Season getting underway this weekend, the members of the group who have not already filled their deer tags will get the chance to take to the woods for a hunt open exclusively to traditional flintlock and percussion cap muskets and rifles.

“It’s something we would like to have seen for some time, but we were afraid they were going to drag in the inline rifles (modern muzzleloaders with synthetic stocks, scopes and ranges out to 200 or more yards) and all of that stuff,” Douglas said. “Those of us who shoot traditionally, we wanted a true traditional season. This new heritage season is perfect for us and it connects us all to the roots of Montana.”

WHILE THE members of the group are excited about the new heritage hunting season, there were a few concerns.

“I am somewhat concerned about the woods being flooded with people who don’t really know what they are doing with a muzzleloader,” said Sean McQueen, one of the younger members of the group. “These types of guns can be frustrating at best and dangerous at worst. If people don’t have the necessary experience or training using them, you are going to have people out there overcharging their weapons, which can be disastrous, or undercharging their weapons and not getting ethical kills. It could get pretty interesting.”

Not all of the members of the group will be participating in the new hunting season, but there is no doubt they will continue to gather for monthly outings for more shooting, camaraderie and good food.

“It’s the quality of company in this group that keeps me coming back. The people in this group are extremely honest and incredibly nice,” McQueen said. “These are great, down to earth guys that would drive across the state in the middle of night to help you out. These are good people with a genuineness that is hard to find these days.”

Reporter Jeremy Weber may be reached at 406-758-4446 or jweber@dailyinterlake.com.

The Flathead Muzzleloading Association holds monthly meetings the fourth Tuesday of every month at Stillwater Lutheran Church, 1401 Church Drive in Kalispell, at 7 p.m. Monthly shoots are the second Saturday rain or shine at multiple locations.

A powder horn and bag sit draped atop a rifle as the members of the Flathead Muzzleloaders Association gather around the campfire for lunch near Columbia Falls Saturday, Dec. 4. (Jeremy Weber/Daily Inter Lake)

Stephanie and Rod Douglas have been shooting muzzleloaders together since 2017. (Jeremy Weber/Daily Inter Lake)

Many of the flintlock rifles used by the members of the Flathead Muzzleloaders Association sport intricate designs and carvings. (Jeremy Weber/Daily Inter Lake)

Sean McQueen points out a target to Darryl Askvig during a gathering of the Flathead Muzzleloaders Association Saturday, Dec. 4. (Jeremy Weber/Daily Inter Lake) 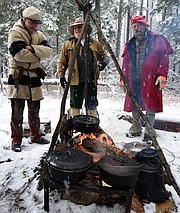 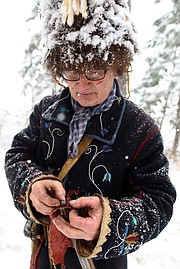