The Glacier Wolfpack likes to go inside-out, but when the outside shots won’t go then what is a wing to do?

In the second half of a 56-55 squeaker over Gallatin Saturday morning, Will Salonen and the rest of the Pack started attacking the rim.

It was Salonen, who scored six fourth-quarter points, that converted an old-fashioned play to knot the game at 51-all at the 3:16 mark.

“I’ve only hit a couple outside shots in our first four games,” said Salonan, a senior who finished with 10 points. “Coach and I even talked last night: I was wondering, ‘What do you want me to do?’ And he said, especially from that three position, put it on the floor. Get to the rim, try to draw fouls.

“That was my mindset coming into today, and it went much better.”

It was still a cold first half for Glacier, which trailed 29-18 when Eli Hunter converted a steal into two Raptor free throws late in the second quarter.

Glacier by then was using a trapping 1-3-1 zone to create some turnovers, and really started its rally with a 3-point play, then a put-back from Nolan Hyde before the period ended.

Salonen’s drive a minute into the fourth signaled that the Raptors would not be able to coast in.

“I told him I wanted him to attack the rim, and he took it to heart,” Glacier coach Mark Harkins said. “I thought he did a great job.

“It kind of got contagious. The guys got involved and got more aggressive as the game went on.”

After his four-point play Sullivan was fouled on his next three as well, and hit two free throws. Salonen followed with his hoop-and-harm, and then Sullivan drove, was fouled and hit one free throw with 3:08 remaining. Glacier had its first lead, 52-51, since being up 9-8.

Tyler Nansel hit a three to get the Raptors their last lead, with 2:20 left. After three empty possessions Glacier called time out, then hit 6-foot-7 junior Noah Dowler for two, and Glacier led for good, 55-54, with 1:25 left.

“Keeps us that one bucket ahead,” Salonen said. “We need him to be a big part. Not only defense, but offense.”

It was no good. An official combining a 3-point signal with a game-ending whistle caused confusion — the Raptors thought there’d been a foul call — but it was over.

Hunter scored 18 points for Gallatin (2-2), and Rylan Schlepp — who was headed to Glacier before his family moved to Bozeman freshman year — added 10.

Ty Olsen added 11 points for the Raptors, who won a one-possession game after dropping two of them the opening weekend.

“I didn’t think we played very well in the first half. I thought we were tentative,” Harkins said. “I challenged them at halftime, and they responded really well.” 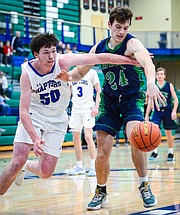 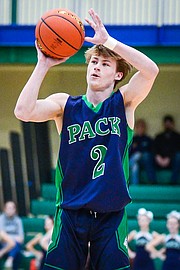 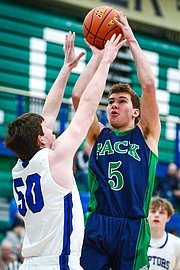