After collapsing during a ski race at Whitefish Mountain Resort, Erik Sanders is attended to by Dr. Tyler Hoppes in the gray helmet, Dr. Pete Heyboer in the orange helmet and nurse practitioner Rachel Desimone in the pink helmet. (Photo Stella Hobbs)

Erik Sanders, from Colorado, stands on a tower outside of Eureka during his first visit to the Flathead Valley in 2019. He said he fell in love with the area during this trip and started making plans to move to Whitefish shortly after. (photo provided by Erik)

When taking into consideration Erik Sanders’ lengthy history of competing in extreme sporting events, the ski mountaineering course that was mapped out before him atop the Whitefish Mountain Resort in early January seemed simple, and almost easy, by comparison.

The 31-year-old Colorado resident has, for example, completed the Grand Traverse Ski race twice, placing seventh overall when he participated in the event in 2018. The affair is a 40-mile teammate-style backcountry ski race from Crested Butte to Aspen that winds through various challenging mountain terrain.

It’s a feat many people wouldn’t even attempt. But for Sanders, events like this are nothing short of thrilling.

“It really comes down to pushing my mind and my body. That’s what I think is most attractive to me about competing. Not winning specifically, but seeing how far you can stretch your limits,” said Sanders, who enjoys mountain biking about as much as he does ski mountaineering, which is commonly referred to as “skimo.”

So when he caught wind of the mountain’s Wednesday Night Ski League when he and his girlfriend visited Whitefish in January, he was quick to sign up for a race during their stay.

Sanders viewed the race as an opportunity to make friends with like-minded individuals more than anything. While the primary objective of the couple’s visit to Whitefish had been to scout out a place to live, they had made a pact that they would each return home with a new friend in Whitefish, a place they’ve been hoping to move to for some time.

And by the end of league night on Jan. 6, Sanders would fulfill his end of the pact, albeit under unusual circumstances that have instilled in him a new and different appreciation for his sporting adventures.

SANDERS ARRIVED at the mountain moments before the race started. There were about 50 competitors, most of whom knew one another from past racing experiences, and the atmosphere was jovial, though Sanders said he remembers none of this.

That’s because about five minutes into the course’s ascent, as racers were skinning up the mountain one behind the other, Sanders collapsed and went into cardiac arrest in a forested area between chairlifts 2 and 3.

That’s according to Rachel Desimone, a pediatric nurse practitioner with Montana Children’s Specialists in Kalispell, who was one of the first competitors to come upon Sanders. It took Desimone, whose job requires her to administer life-saving techniques on a regular basis, only a few seconds to recognize he was exhibiting agonal breathing, a distinct abnormal pattern of breathing and brainstem reflex that is characterized by gasping.

Trailing close behind Desimone, to Sanders’ great fortune, was Kalispell Regional Healthcare physicians Tyler Hoppes and Peter Heyboer. Together, the three health-care providers set in on what would become an estimated 40 minutes of constant chest compressions on Sanders.

“We were all quick to communicate with each other and worked together on Erik,” said Dr. Heyboer, an internist and pediatrician. “What we have all been taught is that the most important variable in a situation like that is having good quality CPR chest compressions. That has certainly been drilled into us as being vital. So that’s what we did.”

Desimone said they quickly established a system, understanding that each of them had an important role to play.

“When you go into a situation like that, it’s really fight or flight. You don’t have time to think about the long-term or to be overcome with crazy emotions, you’re just in resuscitation mode,” said Desimone, who has worked at the hospital for nearly five years. “We sort of automatically fell into our own roles because we knew each other and knew what one another was capable of.”

Even when the Whitefish Mountain Ski Patrol arrived to load Sanders on a toboggan and transfer him down to an ambulance, the three didn’t stop. The team of three followed along as the ski patrol maneuvered the snowmobile and toboggan through trees, ascents and descents, all the while continuing compressions.

Heyboer said at one point the snowmobile hit a few moguls on the way down, flinging him off the toboggan as it was his turn to perform compressions. But Hoppes, an emergency medicine physician, leapt onto the moving platform and picked up right where Heyboer left off.

ALTHOUGH SANDERS has no recollection of the life-saving efforts, he said he won’t soon forget the event and those who were involved in it.

“When I hear the story, it’s still hard to believe it was me in that situation, but that’s the way that life is. Things happen when you least expect them to,” Sanders said. “I couldn’t be more thankful that they were there that day and that they understood the protocols. I wouldn’t be here without them.”

Sanders was discharged from Kalispell Regional about one week after the event. His recovery thus far has been tremendous, considering he was unconscious for such a long time, a span that would have led to brain damage for most patients.

And aside from walking away from the situation with a new defibrillator, Sanders has also walked away with a greater appreciation for life and a better understanding of death.

“Being alive, we experience so many emotions and feelings: pain, struggle, joy, sadness, anger. Moving forward I will embrace all of these emotions because this is what makes us uniquely alive,” he said, adding that he still plans to move to Whitefish with his girlfriend.

AFTER THE ordeal, he is also still eager to get back into physical activity, though doctors have advised he won’t be able to push himself like he used to. Desimone explained that’s the “Type 2 fun” in him, and it’s a quality that keeps him and his newfound friends — Desimone, Hoppes and Heyboer — all moving forward.

“It’s something we all have in common,” she explained. “We actually like the breathlessness and pushing our bodies to limits we didn’t know were possible. I think we enjoy the suffering aspect of it.”

Just as Sanders is appreciative of the professionals that were there that day, they are equally as grateful to be a part of his story.

“I’m happy I was in the right place at the right time and that I could be a part of Erik’s story,” Heyboer said. “There was a huge team involved in saving him and I’m grateful to have been a part of it.”

Both Heyboer and Desimone added that they hope his story will push others to pursue their CPR certifications. Although it was Sanders who went into cardiac arrest that day, they said it could have been any of them. They hope if the roles were reversed, someone would come to their aid as well.

“I don’t want to downplay the situation, but what we did is something that anyone can get trained to do,” Desimone said. “You never know if you might be in a situation where you’re saving someone’s life, too.” 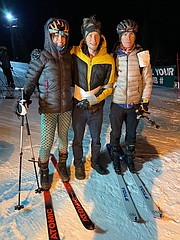 Erik Sanders, from Colorado, stands on a tower outside of Eureka during his first visit to the Flathead Valley in 2019. He said he fell in love with the area during this trip and started making plans to move to Whitefish shortly after. (photo provided by Erik)