Plans for a $47 million five-story hotel and separate parking garage in downtown Kalispell have the potential to change not only the city's skyline but also the economic stability of Main Street.

Kalispell city staff are reviewing a proposal to construct a boutique hotel on the city-owned parking lot at the intersection of Third Street West and Main Street.

"We envision a total transformation of this site from a quiet surface parking lot to a busy Main Street attraction," the developers, Montana Hotel Dev Partners LLC, wrote in their proposal.

Montana Hotel Dev Partners is led by Bill Goldberg, owner of Whitefish's Compass Construction. Goldberg took ownership of the historic Kalispell Mercantile building in downtown Kalispell at the start of this year.

Goldberg has teamed up with BOND Partners, a San Diego-based hotel development and hospitality management company. Another partner in the project is Alchemy Development, whose CEO and owner John Costa also owns The Interim Bar, formerly First Avenue Taphouse and Casino in Kalispell.

In December 2020, the city asked for "proposals from development firms seeking to privately finance, construct and manage a redevelopment project" in order to meet the Kalispell Downtown Plan's stated "need to redevelop city-owned surface parking lots into more beneficial uses to eliminate blight and increase tax base."

Montana Hotel Dev Partners submitted the only proposal before the city's July 9 deadline.

This is the first time Kalispell has solicited a private developer for a project on city property, according to Katharine King with the city's Community and Economic Development Department.

The city required applicants to demonstrated a significant amount of research, planning and ability to carry out a selected project, which King said could have discouraged some would-be developers from submitting a proposal.

The city likely wound up with only one proposal because most developers are too busy to get involved in yet another project this year, King added.

KING EXPECTS the current proposal, if approved by the city, would indeed keep the developers busy.

The proposal includes the construction of a five-story hotel with a basement, a three-story parking structure at the southeast corner of First Avenue and First Street West, and the renovation of office space in another downtown building — all within two years of signing the developer's agreement.

The hotel, to be named the Charles Hotel after Kalispell founder Charles Conrad, would encompass 86,000 square feet and 79 rooms.

The hotel also would have a restaurant, a bar and lounge, retail spaces, conference space and potentially a rooftop patio. The developers already have secured a liquor license.

Based on designs from A&E Design, the Charles Hotel would be built with the top two levels slightly recessed from the bottom three stories, in order to make the large-scale development fit better into the surrounding landscape.

The vision for the Charles Hotel also includes antique design features as a nod to the history of the site, which once housed a building constructed by Conrad's daughter, Alicia, through funds generated by Conrad's famous buffalo herd. That structure, originally called the Buffalo Block building, burned down in 1976.

SINCE THE Charles Hotel would take the place of a current city parking lot, the developers are required to submit plans to replace the 42 existing parking spaces and account for additional parking needs generated by the hotel.

The proposed solution is a three-story, 165-space parking structure on the city-owned Eagles parking lot, located at the corner of First Avenue and First Street West.

The developers also expressed interest in continuing to use local surface parking lots for hotel employees and valet services in the event of large conferences.

The proposal also mentions adding a collection of support office spaces through a tenant improvement project within an unspecified existing building near the hotel site.

The anticipated economic impact of the project is $516,000 in annual tax revenue allocations to the Downtown Tax Increment Financing (TIF) District.

However, the developers asked the city to "consider possibly offsetting impact fees for the hotel development by utilizing TIF funds."

THE USE of TIF money has raised concerns about the proposal from nearby downtown property owners.

"What this really is, is a big giveaway," said Karlene Osorio-Kohr, a downtown property owner.

"Most of us who have property, we weren't given government funds to purchase the property or develop the property," she said. "We're being taxed for that [the TIF] and it's going to one person. It was supposed to be for the good of the district … There's a lot of wrongs here."

King, with the city's Community and Economic Development Department, stressed the project is in a very early stage.

The Kalispell City Council will review the proposal at a work session next Monday. Afterward, a five-person selection committee will meet to discuss the proposal and return a recommendation to the council in September.

Although there's only one proposal on the table, King said, it still needs to meet the city's scoring criteria and earn the council's approval in order to move forward.

"There will still be a lot of work to do," King said. 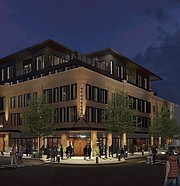