The variety woodworking machine just moments after being exposed to the light of day for the first time in nearly 40 years in 2018. (Steve Williams photo)

For nearly 40 years it sat collecting dust in a field outside of Chester on Montana’s Hi-Line.

Now, with the help of Kalispell collector and restoration expert Steve Williams, the only remaining Greenlee Variety Woodworker in the world soon will have a home in a Smithsonian affiliated museum.

The 3-ton, fully restored and functional iron behemoth will begin the 2,500-mile journey to the National Museum of Industrial History in Bethlehem, Pennsylvania, next week, returning to the home state of the pair of brothers who founded the company that made it.

The Greenlee Company traces its roots to the 1838 birth of twins Ralph and Robert Greenlee in Pennsylvania. The sons of barrel maker Edmund Greenlee, the boys inherited their father’s mechanical ingenuity. After moving to Chicago in 1862 and later Rockford, Illinois, their Greenlee Bros. Company went on to manufacture a host of innovative industrial machines, including the No. 576 Heavy 16-inch Variety Woodworker that Williams has spent nearly 1,500 hours restoring over the past three years in his shop.

The owner of Montana Handmade off Montana 35, east of Kalispell, Williams has a passion for restoring and utilizing vintage woodworking machines, and that led him to purchase the unique item from cabinetmaker Norm Anderson in 2018.

Many of the machines Williams has restored to utilize in his shop were acquired through an advertisement he maintains on Craigslist that simply states, “Vintage Woodworking Machinery Wanted,” but when Anderson answered the ad, claiming to have a “massive, very old Greenlee jointer,” it immediately piqued Williams' interest.

THIS PARTICULAR Greenlee Variety Woodworker had spent decades being used by the pattern shop of the Anaconda Copper Company in Great Falls, where it was employed in the production of the high precision wood parts used in the creation of the patterns for sand-casting molds that were later used to make the giant cast-iron gears (some 16 feet tall) for mining operations around the world.

Being a pattern maker was a demanding position that required its workers to be a combination of engineer, draftsman and highly skilled woodworker, and, according to Williams, pattern makers today likely would need advanced college degrees.

The work required only the best and most precise machinery, which is why the Greenlee Variety Woodworker was picked to do the job in 1910.

The machine somehow survived the scrap-metal drives of World War II that led to the recycling of most others of its kind and continued to be used in the pattern shop until the Anaconda Copper Company closed its doors for good in 1979.

Anderson purchased the machine from a broker that was liquidating the copper company’s assets, but soon found it would not fit in his small shop in Chester. So, the 60-year old variety woodworker found a home in the field of Anderson’s brother-in-law’s 5,000 acre industrial farm north of Chester. After being covered in 10 gallons of lard and encased in a handmade wooden crate, the machine sat in the field for the next 40 years, until again seeing the light of day when Williams purchased it in 2018.

WILLIAMS SAID it was love at first sight.

“As soon as that wooden door hit the ground, I pulled out my wallet and we made the deal,” he said. “I couldn’t wait to get it home and get to work on the restoration.”

With the help of a friend with a low, sturdy trailer and a heavy-duty pickup, Williams drove the 200 miles to Chester to fetch the machine. A large farm tractor loaded it on the trailer and Williams and his friend returned to Kalispell, where a crane unloaded the piece just outside of Williams’ shop.

Covered in a fine layer of caked prairie dust, the machine was moved into the workshop where Williams was amazed to find it in amazingly good condition.

“There was virtually no rust, no replacement parts and only a small number of parts were missing. Considering where it had been sitting for the previous 40 years, I couldn’t believe how well-preserved it was,” Williams said. “All it took was a slight tap on each bolt and then I was able to remove them all by hand. Those pattern-shop workers were meticulous in the care of their machines since they depended on them for such accuracy and that care really shows.”

As he disassembled the machine for cleaning, Williams also began researching its past.

A trip to the Montana Historical Society in Helena gained Williams rare access to the society’s archives, where he spent two days going through the catalog looking for glass-plate photographs of the Anaconda Mining Company pattern shop.

An ad in the Great Falls Tribune led to Williams being able to make contact with one of the Anaconda Copper Company’s former pattern-shop workers, who, before his death last year, was able to teach Williams much about the machine’s uses at the shop.

Once they found out what was going on, Emerson decided to fully fund the restoration effort and contacted the National Museum of Industrial History to arrange to have the machine put on display there.

“Emerson funded this completely out of altruism to honor their history and the history of this machine. A company that is willing to do something like that is very rare and I thank them for all they have done,” Williams said.

His restoration project complete, Williams and his labor of love will begin the long journey to Pennsylvania on Tuesday, his 73rd birthday, in a truck whose use for the trip has been donated by Penske.

Upon arrival, the Greenlee Variety Woodworker will join the thousands of other artifacts on display at the National Museum of Industrial History, and will be hooked up to the museum’s line shaft system in full working order.

“I never dreamed it would end up in a Smithsonian affiliated museum. When I first bought it, I was just like Norm — I had no idea what I was going to do with it. I just got excited and reached for my wallet,” Williams said. “Everything has just worked out tremendously, all thanks to Emerson. It is quite an honor and it is amazing to be a part of what is truly a Montana story, beginning to end.”

The variety woodworking machine just moments after being exposed to the light of day for the first time in nearly 40 years in 2018. (Steve Williams photo) 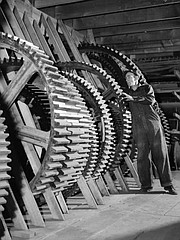