Whitefish residents Nick and Karen Chickering are pictured at a reception Nov. 16 next to a display of rare western literature, part of a larger collection which they recently donated to the Broussard Family Library and Learning Commons at Flathead Valley Community College. - photo by Sally Johnson, FVCC graphic design specialist

A bookplate affixed to one of the books in the Allen L. Chickering Collection at the FVCC library

A rare 1907 first edition of James Willard Schultz's memoir "My Life as an Indian" is part of the Allen L. Chickering Collection recently acquired by the FVCC library.

The Old West is back and wild as ever at the Broussard Family Library and Learning Commons at Flathead Valley Community College, thanks to a significant donation of Western literature.

On Nov. 10 Whitefish resident Nick Chickering and his wife Karen presented the college with a gift of 287 rare Western Americana books — many of them written in the 1800s and some in the 1700s — about the Rocky Mountains, exploration of the West, the Northwest, the Southwest and the tribes.

Nick Chickering was the inheritor of the library, which was put together by his grandfather, Allen L. Chickering, who was born in 1877 and was an avid, lifetime collector and reader of books. Most of the books have his personal bookplate affixed to the inside cover.

“When he died in 1958, my grandfather had what was supposed to be the largest private collection of Western Americana books in the United States,” Chickering said.

The donation represents about 30% of the original collection, which also contains an extensive portion of California history books.

“Believe it or not, my grandfather read every one of them,” Chickering said.

“They’re in four different languages and, having learned Latin in law school, he taught himself how to read in German, Spanish and French.”

Allen L. Chickering had served as president and was a longtime board member of the California Historical Society and frequently wrote in its quarterly magazine.

AMONG THE numerous rare volumes is a circa 1657 leatherbound French book with a Paris copyright. The impressions from the printing press can still be felt on the back of its pages.

There is also a first edition from 1907 of James Willard Schultz’s book “My Life as an Indian,” the classic memoir about Schultz’s life with the Blackfeet and Plains Indian life.

“Many of the books were written in first person by people who lived in those times,” Chickering said. “It’s tough to read. It was a brutal life that they had to survive. It’s an eye-opener to read what they endured.”

Chickering said he always knew he would donate the books one day and he’s glad they are now part of the collection of FVCC’s new library.

FVCC’s Director of Library Services Morgan Ray said that opening and unpacking the 15 boxes of books was especially exciting.

“I felt like a little kid on Christmas morning,” she said. “To hold something so fragile, it’s like holding history in your hands.”

Ray said the library plans to list the entire Allen L. Chickering Collection on WorldCat, the world’s largest library catalog, so people know the books exist here, and also explore the process of listing them on the Internet Archive digital library.

That said, the books will be available to students and the community to read in what is referred to as a closed stack, meaning that patrons may read the books in a special room in the library dedicated to them.

“As we move into a digital age, it’s a tangible way to get your hands on the past.” Ray said. “To get to hold a signed first edition, first-hand account of someone’s life is a chance to connect students, authors and historians to an experience not commonly found or readily available.”

“I’m really glad to do this because I think Flathead Valley Community College has played such an important role in providing opportunities for young people to make a living in all sorts of career choices and have a quality of life,” Chickering said.

“We’re incredibly thankful and honored that Mr. Chickering chose our library, our students and the people of Northwest Montana for this donation,” Ray said.

While Chickering hopes the library eventually will make them available digitally, he points out that books are meant to be read.

All libraries should have books,” Chickering said. “And if people are curious about how the West was developed and the way it was back then, these are the books to read.” 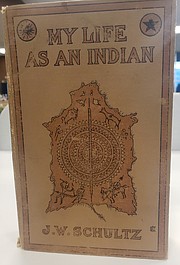 A rare 1907 first edition of James Willard Schultz's memoir "My Life as an Indian" is part of the Allen L. Chickering Collection recently acquired by the FVCC library. 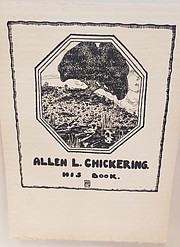 A bookplate affixed to one of the books in the Allen L. Chickering Collection at the FVCC library