He is the first- born son of Ted W. Waggener and Lois “Dode” E. Waggener (Harmon) and was born on April 25, 1945, in Billings. He was brought to Kalispell as an infant, where he remained a lifetime resident of the Flathead Valley. Ted graduated from Flathead County High School, where he was an accomplished athlete on both the football and basketball teams. Shortly after graduating, he married the love of his life, Trudy Bea Bergstrom, and hand in hand, they began building their family and their lives together.

At the age of 26, Ted became a Kalispell firefighter, where he served alongside some of Kalispell’s finest for 31 years. During the last 12 years of his service, he held the position of fire chief. He was a dedicated firefighter, and over the years, there were many times he faced dangerous situations. However, without hesitation, he often put aside concern for his own safety so that he could render aid to those in need.

Ted’s heart for service extended far beyond his role as a firefighter. Each and every day of his life was spent demonstrating his love for Christ by helping others. Whether delivering meals to those in need, helping out a neighbor, or mowing lawns for people, he always did so in his own quiet and uncelebrated way. His faith in God, his love for family, and his commitment to his firefighting brotherhood were always Ted’s most important priorities. His appreciation and admiration for God’s creation often meant he could be found walking on a trail through the forest or sitting beside the campfire gazing at the stars. His gentle nature caused children and animals to gravitate to him, and he was most content with a grandchild in his arms and a dog on his lap.

His legacy as a kind, caring, compassionate man with a heart that truly desired to serve God will live on forever in the memories of all those who knew him.

He was preceded in death by his father, Ted; mother, Lois; and brother, Jim.

A memorial service will be held at Central Bible Church, where Ted was a dedicated member for many years, on Saturday, Oct. 23, at 11 a.m., followed by lunch in the gymnasium. The service will be live-streamed and can be viewed on the Central Bible Church Facebook page and YouTube CBC Kalispell. In addition to the service in the church sanctuary, for those wishing to attend the service while maintaining social distancing precautions, a live stream will be available in the church gymnasium. Face masks will also be available at the door.

Funeral arrangements are being provided by Johnson-Gloschat Funeral Home in Kalispell. Condolences and memories can be shared via email to wecare@jgfuneralhome.com 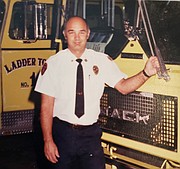