Airmen and Guardians from the 4th Space Operations Squadron, distribute water to a child at Ramstein Air Base, Germany, Aug. 25, 2021. Water and food distribution is one of the many ways that military members are contributing towards Operation Allies Refuge (U.S. Air Force photo by Senior Airman Jan K. Valle).

On Aug. 30, 2021 the United States military pulled out of Afghanistan, officially putting an end to the longest war in American history.

The country fell back into the hands of the Taliban and hundreds of thousands of refugees who fled their homeland were left without food, shelter and clean water. Many were flown out of the country to be taken to makeshift camps and emergency processing centers in faraway places such as Spain, Germany, Qatar and Uzbekistan.

Thousands suddenly were experiencing one of the worst humanitarian crises in recent memory, people desperate for aid and support as well as direction and structure.

Enter Maj. Chad Everett, a 2006 graduate of Flathead High School and an active duty Air Force officer tapped to help organize processing efforts on what became one of the largest refugee camps in the world: the Ramstein Air Base in Ramstein, Germany. Everett says that, although military training equipped him with most of the skills needed to guide and instruct large groups of people at once, the task he was called upon to perform still proved incredibly daunting.

“I was initially there in Germany as the communications director, which essentially meant that I led a squad of 86 people providing for over 50,000 users in the Ramstein area alone,” Everett said. “But we sort of graduated from those numbers to suddenly having to process over 35,000 refugees. Of that 35,000, I think we processed 10,000 people ourselves.”

Everett says that his responsibilities involved making sure all refugees had equal access to food, water, medical and social support, and religious accommodation.

“When you're out there and you're put in charge of so many people, your tasks range anywhere from making sure tents are serviceable and well air conditioned, to literally building schools,” Everett said. “It was a real learn on the fly type of situation.”

He compared it to being the mayor of a small town, juggling the needs of many different people all at once. To make it work, you need help from a variety of people with different skill sets.

“We didn’t have a very orthodox group of people helping us,” Everett said. “Some of the people tasked to help me pass out food included German police officers, a chaplain, an aircraft mechanic, a nurse and even one dentist. So it takes all kinds.”

Most of the obstacles involved in an operation of that size revolved around logistics.

“You have to integrate and, more importantly, cooperate with people who are desperate and who you don’t share a language with,” Everett said. “So just the simple act of distributing food quickly in a camp of over 400 people becomes a statistical challenge.”

Everett says that although the challenges were great, the rewards of the experience have been far greater.

“There’s so many people you get to meet and work with that you otherwise wouldn’t get the chance to,” he said. “It really gave me, as well as many others, the opportunity to step up and be a leader in ways that I was surprised by.”

“If you're like me or anyone else who knows Chad, it wouldn’t surprise you in the slightest that he thrives in these types of situations,” Lona Everett said. “He’s a natural born leader.”

She cites a childhood spent in the Boy Scouts and an innate desire to organize and inspire others as the main source of her son’s leadership abilities. Those were the core reasons he entered the military in the first place, she recalled.

“If all his friends were playing a game at school, he would be the first one organizing everyone and pulling everything together,” Lona Everett* said. “Put that together with the invaluable experience he gained from being a Boy Scout and his love of tinkering and technology and you’ve got all the ingredients needed for someone to do something special and inspire others.”

Toward the end of 2021, as the refugees were finally processed, tent cities torn down and Ramstein reverted to its primary role as an air base, the time came for recognizing the hard work of the preceding months.

For his efforts, Chad Everett was honored as a Field Grade Officer Of the Year and recognized as one of the top officers in the theater, which, according to him, means having to beat out some stiff competition.

“That would mean beating out every other field grade officer stationed throughout both Europe and Africa,” Everett said.

“So it at least gives you a leg up when looking for jobs,” he added jokingly.

It’s this award, coupled with his achievements at Ramstein, that has won Everett a spot at the prestigious Air Command Staff College in Montgomery, Alabama, where he currently resides.

Although already recognized for his efforts at aiding refugees, Everett believes there is room for improvement.

*This article has been updated with the correct spelling of Lona Everett's name. 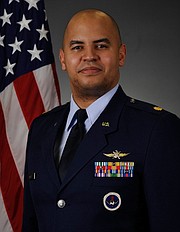 Airmen and Guardians from the 4th Space Operations Squadron, distribute water to a child at Ramstein Air Base, Germany, Aug. 25, 2021. Water and food distribution is one of the many ways that military members are contributing towards Operation Allies Refuge (U.S. Air Force photo by Senior Airman Jan K. Valle).