“You could hear all these helicopters coming in and you knew it was all the heads of state coming to the building,” Price said.

Leaders of the European Council were flying in to attend a summit that resulted in granting Ukraine candidate status for European Union membership in council chambers where Price had visited three days before. While she didn’t notice any public stir about the decision, she said the EU’s stance strongly condemning the war in Ukraine was reiterated at the start of presentations during the trip.

“It was a clear, resounding message to make that stance known. Maybe because it’s such a frequently asked question they wanted to get it out of the way at the beginning, but it was very cohesive in terms of the unity they have concerning condemning the war in Ukraine by Russia,” Price said.

Brussels serves as the administrative center of the European Union, which Price was learning about firsthand through a travel grant sponsored by the University of Pittsburgh European Studies Center with funding from the EU Delegation to the U.S. and U.S. Department of Education.

During the study tour, about 25 to 30 K-12 and community college educators from across the U.S. learned about issues the EU faces including Brexit, migration, diversity and security, according to www.ucis.pitt.edu. The tour included a day in Luxembourg visiting the Court of Justice of the European Union, which she said is comparable to the U.S. Supreme Court.

While the highlight of the week was visiting the Europa building there were plenty of other enriching experiences.

“What I think was really great about the program is we got to speak to liaisons of the public about it and see where the European Union is right now but also the direction it’s trying to go in,” she said. “It’s pretty complex but I think the main message they were trying to convey was the democracy and [how] to make things unanimous in agreement with all the member states.”

There are 27 member states in the EU. What Price said she learned is that reaching agreement among all those nations, “takes a lot of work, but it’s possible.”

AS A French and English teacher Price was also cued into languages during the tour.

“The north of Belgium speaks Flemish, which is a type of Dutch, and the south speaks French. Brussels is this neutral space where they speak both and the signs are in both languages,” Price said. “Because of having the EU there you have an intense amount of interpreters, translators and government representatives and of course, all of their families.”

Price learned that an emphasis was placed on learning in a person’s native language, which was evident while visiting a school for the children of EU employees. Core classes, for example, were taught in a child’s native language.

It was also the last day of the school year, a day filled with fun activities.

“It was interesting to see the last day of school is just as crazy in Europe as it is in the United States,” Price said with a smile.

It was during this visit that she had a meaningful experience meeting the school librarian and gleaning what information she could on French language texts and book titles that would be of interest to her students back in Columbia Falls. The librarian had the task of overseeing a library with sections dedicated to a multitude of languages.

“You have much more variety over there, and she, also as an educator, knows what would help someone learning French but still be age appropriate for high school. You don’t want to give a baby book to a ninth-grader you know,” Price said, which is something people might do to learn simple sentence structure.

She was also looking for French texts that had other educational applications such as teaching culture, history and geography.

The two took a trip to a bookstore. It’s safe to say she came home with many books.

THE SCHOOL visit wasn’t complete without hanging out in the teacher’s lounge where she conversed with a couple of teachers in French.

Price increased her historical knowledge of Europe by visiting the House of European History museum.

“I didn’t realize how it was a very significant place to visit. I’m glad I took the time to see it. They had the pistol that killed Franz Ferdinand and life jackets from the Lusitania — really significant artifacts,” she said.

Of course, who could visit Belgium without tasting Belgian waffles?

“There’s two different kinds of Belgian waffles. There’s the Brussels kind and the Liège one. It’s much more sugary. I ate it with no toppings,” she said about the latter.

Price said she was grateful to finally get a chance to travel and gain professional training in person. The program has postponed sending educators abroad for the past two years due to pandemic restrictions. This meant, the 2020 and 2021 teacher cohorts, which included Polson High School history teacher Patrick Danley, attended this year on separate weeks. They were the only teachers representing the Northern Rockies.

“I think experiences outside the classroom enrich learning. Like these books, for example, I didn’t even know these titles before going there. There were just really cool things I was able to do I wouldn’t have been able to do on a Zoom call,” she said.

As part of the program Price and Danley will write lesson plans that will be made available to other educators online. Price has been brainstorming lesson plan ideas.

“I’m thinking of trying to get students to think of agreement and democracy and current events at the same time,” Price said. 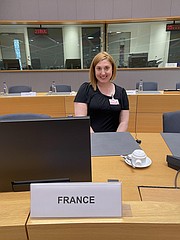 Columbia Falls High School English and French teacher Jeanette Price sits in the European Council chamber on June 20 during a study trip to Belgium. She is seated where aides to the president of France, Emmanuel Macron, would sit on June 23 when the council granted Ukraine candidate member status to the European Union. Interpretation booths are located in the background. (Photo courtesy of Jeanette Price) 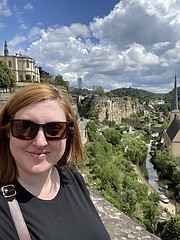 Columbia Falls High School English and French teacher Jeanette Price traveled to Luxembourg on June 24 to visit the Court of Justice of the European Union, which is comparable to the U.S. Supreme Court. (Photo courtesy of Jeanette Price)