The Flathead High School marching band is set to get its first new uniforms in about 50 years. Students show the old uniform, left, next to the new design, right.

At Flathead High School, band director David Johnke unzips a black garment bag to reveal a flash of brilliant orange appearing on the left side of the school’s new marching band uniform jacket, contrasting against gray and black.

Diagonal stripes of silver jut out from the edge of the orange, which takes the shape of an “F,” a detail repeated on the hat.

Handing over the new uniform to sophomore Sophia Ilin, she leaves to try it on while her classmate, Dyson Linden, changed in the old marching band uniform for comparison. It’s the first time they’ve seen the new uniform in person.

A smiling Ilin returns to the band room wearing the modern uniform with those waiting expressing amazement for the new design.

“I can’t wait until next year,” Linden said.

Ilin said she will be thankful to wear new uniforms.

Next, Johnke helps her put on a pair of gauntlets over her wrists. Ilin then puts her hair up and places a cylindrical, flat-topped military hat, known as a shako, on top of her head, buckling the strap underneath her chin.

Johnke caps off the uniform with the finishing touch — a black plume interspersed with silver strips of mylar.

The school is fundraising for the new uniforms, which will be the first purchased in about 50 years. With the order placed, the new uniforms are expected to arrive next fall in time for the marching band season.

“I think students will be more proud of what we’re doing,” Johnke said. “The community will be proud of the new uniforms, at least I hope.”

THE SAME manufacturer, DeMoulin, that created the old uniforms worked with the school on the new design. It took about 10 renderings to reach this point, Johnke said.

“The jackets are shorter, which creates an illusion of tallness and longer legs,” he said.

Uniformity is key in marching band and not just with each step and note. The streamlined design will help create a similar silhouette across different body shapes.

“There’s a lot of design elements in there that trick your eye,” he added. “It’s a more flattering look.”

The new uniform also promises to require less adjusting, which can be a hassle to a marching band in motion.

“It’s easier to stand tall. In the old ones you really had to work at it to look good. If you slouched, even a little bit, everyone looked bad,” Johnke said.

THROUGH DECADES of care and because of the excellent craftsmanship, the uniforms have lasted since the 1970s when they were purchased, notes music assistant Ginny Reese, who fits and tailors all the music uniforms. It’s not uncommon for students to ask to wear the same jackets — which are numbered — as their parents, even grandparents.

Flathead senior Haley Huff is one of many students with generational ties to the uniform.

Her paternal grandfather, now living out-of-state, was part of the first group to wear the uniforms when they were new and recalled a story she was told when he was fitted for one.

“They measured him, but he had grown six inches over the summer in height and they insisted he still try it on. It ripped the back of the uniform,” Huff said with a laugh.

By happenstance, when she joined the marching band she ended up wearing the same jacket and overlay her mother wore when she was in high school.

“Jacket number 32, I think it was,” Huff said, adding that her aunt was also in the FHS marching band.

Huff wore the jacket for the next three years until joining color guard this year.

While the uniforms have withstood the test of time, they are showing wear. Reese said that while the old uniforms are well-made there are only so many times before seams are too worn out, linings rip and dry cleaning ceases to get all the stains out.

“This is a great example of the age,” Reese said, pointing out some black staining from a percussion harness.

“And it’s wool and they’re heavy. It’s an old-school style for sure but it’s classy” Reese said.

The new uniform is made of a wool and polyester blend, which in addition to being lighter weight, resists fading, which is important when marching out in the sun. Flathead’s marching season includes three home football games, the high school homecoming parade, the Northwest Montana Fair parade, the University of Montana homecoming parade and the Montana State University Showcase of Bands in Bozeman.

“The quality will still be good if not better than the old uniforms,” Johnke said.

THE OLD uniforms are also outdated in a cultural sense. The jacket overlay of the old uniforms has an embroidered image of the old school mascot — a profile of an American Indian. The uniforms are the last in the school with the logo.

In March, Bryce Wilson, FHS activities director and assistant principal, gave a presentation to the school board with a bit of history on the band uniforms and the old logo. In 2018, the school met with the Salish Kootenai Pend d’Oreille Culture Committee to review various images used by the Flathead Braves. The cultural representation of any Indian likeness was deemed offensive by the committee, but the use of the arrow and feathers is acceptable, according to a school board document.

What will be done with the old uniforms is yet to be determined, Johnke said.

Recently, he said the curator of a DeMoulin Museum in Greenville, Illinois, reached out requesting one of the uniforms for its collection, which extends to the company’s origins manufacturing regalia and initiation devices for fraternal orders.

ONLY A couple of adjustments remain before the new uniforms are created. This includes changing the collar to black and adjusting the hat design more toward the center.

Funds are still being raised through the Flathead Band Parents organization to cover costs. The school plans to purchase 100 uniforms at a cost of about $665 per uniform with support from the alumni association and $10,000 from the school’s activities budget. I may need to take fundraising info out if I get a response from Johnke Saturday if the school is done fundraising.

“It takes about three months to have them manufactured,” he said. 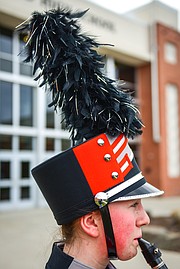 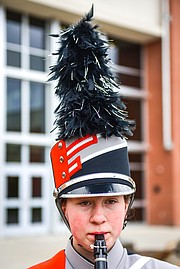 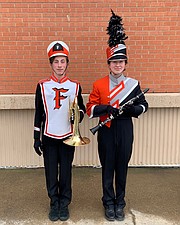 The Flathead High School marching band is set to get its first new uniforms in about 50 years. Students show the old uniform, left, next to the new design, right.