A culturally modified tree near the John George “Kootenai” Brown cabin marked with the letters ZEKE and number 88. Their meaning is unknown. (photo provided)

A tree near the John George “Kootenai” Brown cabin marked with several letters and numbers. Their meaning is unknown. (photo provided)

Archaeologists and preservationists are working together to record information on a group of culturally modified trees (CMT) in Canada’s Waterton Lakes National Park.

While the cabin itself now draws thousands of visitors to the Kootenai Brown Pioneer Village in Pincher Creek, the original location of the structure was lost after it was moved in 1970. Retired park warden and cultural resource management volunteer Edwin Knox set out to relocate the site of the cabin in July 2016 as the park marked the centennial of Brown’s death.

After tips from a local rancher pointed him in the right direction, Knox used a 1939 aerial photograph, along with photos from the 1970 moving of the cabin, to pin down the poplar grove that surrounded the cabin and its exact location.

“It was the marking of the centennial of Kootenai’s passing that got me looking for the original site of the cabin. Having been moved half a century prior, it became obvious that no one in my circle knew where it originally sat,” Knox said during a presentation as part of Waterton-Glacier’s annual Science and History Week on Thursday. “I was in awe of the surroundings at the old cabin and thought immediately, seeing the old aspen trees, that there could be scribings from the old days. Sure enough, within minutes, a living Joe Cosley tree was found.”

Joe Cosley, a colorful character who lived in the Waterton-Glacier area at the turn of the 20th century was well known for the stylized JC initials and hearts he would carve into area trees.

Many “Cosley” trees are known to exist, but the new discovery marked the only known living tree marked by Cosley, with the only previous one falling in a 2002 snow storm.

The Cosley tree was not all that Knox found.

In addition to the Cosley tree, which was marked with the characteristic heart, JC and 29, Knox found six other trees with a variety of carvings of unknown origin and meaning.

“We know a bit about one of the scribed trees, but much remains to be learned about the remaining six,” he said.

With one of the CMTs having already fallen since being discovered in 2016, University of Calgary archaeologist Dr. Peter Dawson, who specializes in the digital preservation of heritage sites at risk due to the impacts of climate change and human-caused destruction, set out to create a digital model of the trees and their carvings.

In May of 2022, using portable LiDAR technology, Dawson and his team created a model incorporating millions of data points captured across the area of roughly two football fields in the poplar grove.

The efforts are part of the Alberta Digital Heritage Archive, which hopes to preserve at-risk locations for future generations to enjoy in the event they are damaged or destroyed by wind, fire, vandalism or wild animals.

“When we think about human made heritage sites, we kind of think of them as permanent. We think a building that has been standing for 150 years will stand for another 50. Heritage sites are at risk due to a number of factors and the same is true for biological heritage sites,” he said. “They may not all be officially recognized heritage sites, but they are still of extreme importance to particular communities and groups of individuals that have a very close association with them.”

In addition to preserving the location, Dawson also hopes his efforts will help people be able to enjoy the site, which is far off the park’s trail system on privately leased land.

“This site is not easy to get to and we probably don’t want too many people to visit the site because of the potential of damage to the site,” he said. “The digital archive gives people the chance to visit the grove without having to actually make the tough trip out there.”

For more information about the Kootenai Brown Poplar Grove Cabin Site, visit the University of Calgary online at https://alberta.preserve.ucalgary.ca/sites/kootenai-brown-poplar-grove-cabin-site/

Reporter Jeremy Weber can be reached at jweber@dailyinterlake.com. 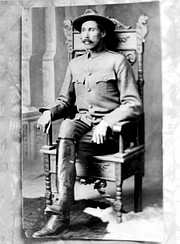 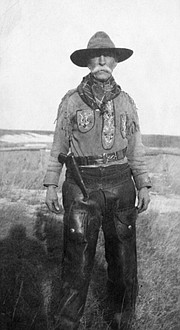 A tree near the John George “Kootenai” Brown cabin marked with several letters and numbers. Their meaning is unknown. (photo provided)

A culturally modified tree near the John George “Kootenai” Brown cabin marked with the letters ZEKE and number 88. Their meaning is unknown. (photo provided)