Doug Bonham, with technology startup Field Data Technologies, stands on the summit of Looking Glass Ridge just north of East Glacier as part of work to test a reimagined trail camera. The antenna next to him was receiving a signal from a test device located 12 miles away along the Heart Butte Cutoff Road. (Courtesy photo)

Traditional trail cameras revolutionized field research for wildlife by providing continuous unobtrusive monitoring — but while they work for studying large animals, the technology doesn’t apply as well when scientists are looking to examine smaller creatures.

A technology startup in Essex is looking to change that by further developing a reimagined trail camera. The device utilizes new technology allowing cameras to detect animals that do not trigger commercially available cameras.

“We’re looking to bridge the gap between technology and science,” Doug Bonham, a co-founder of the startup, says. “Wildlife tech is interesting in that a lot of people who go into the natural sciences very often want to get away from technology so they are not thrilled about technology. But then the technology people don’t know field biology well enough to know what is needed.”

Bonham, along with partners Connie Woodman and Christopher Evelyn, who also make up the team behind the technology company Field Data Technologies, all have science backgrounds coupled with an interest in making technology work better for scientific study.

Bonham, who lives in Essex, has a technology background having worked for Microsoft as an electronics engineer and has a degree in wildlife from the University of Montana. Woodman, based at Texas A&M University, is a bird enthusiast and Evelyn is a herpetologist focusing on amphibians and reptiles at the University of California, Santa Barbara.

The company this year got a large boost in moving the trail cameras forward with three business grants totaling $344,200 from the U.S. Department of Agriculture (USDA), the National Oceanic and Atmospheric Administration (NOAA) and the state of Montana. The grants are critical in the next steps for the company as it looks to refine the technology behind its new trail camera and prepare for production.

The trio connected over a mutual interest in improving technology for studying cold-blooded reptiles, amphibians, fish, insects and birds — those that don’t work well with traditional trail cameras.

“If you have a little tiny bird and a big trail camera it moves quickly past the camera,” Woodman said. “And there’s all these important creatures like a salmon or a trout that you’re not going to detect on an infrared trail camera.”

Traditional trail cameras that rely on passive infrared technology are designed for hunting big game animals and rely on the animal to be at a different temperature than the background as a way to detect motion.

“Deer and elk against a snowy Montana background work fabulous, but endangered salamanders in a stream, salmon swimming up a spawning stream and insect pollinators are critically important species that trail cameras don’t work on,” Bonham said.

THE COMPANY has been awarded two Small Business Innovation Research Program grants, which they say is one of the most coveted ways to launch a technology startup company, in the field of conservation technology. The first grant, from the USDA, is for new technology to monitor pollinators. The second, from NOAA, is to monitor migrating salmon in spawning streams. Additional funding came through Montana matching the federal grants.

Bonham said the grants are key. Decades of hard work have led to this point, he said.

“The fields of conservation and ecology are blessed with many aspiring and hard-working students but provide few viable opportunities to make meaningful contributions,” he said. “These grants give us the chance to make an important contribution.”

The grants focus on studying species — pollinators and salmon — that are both ecologically and economically important.

One out of every three bites of food in the United States depends on honey bees and other pollinators, according to the USDA. Honey bees pollinate $15 billion worth of crops each year, including more than 130 fruits and vegetables.

Pollinators play a critical role in crop production and once a crop has failed it’s too late to intervene, but improvements in studying insects could change that, Woodman says.

“There’s not a good way to monitor what’s happening live and having a trail camera that can adapt to these tiniest of animals — bees and flies — that is groundbreaking because it can help a lot of people but it can also help the animals through conservation that protects those native pollinators,” she said.

In studying salmon, a fish that are anadromous, meaning they migrate from the ocean to freshwater to spawn, Woodman says it’s important to determine if any of the habitat along that journey is compromised because it can mean a loss of the species.

Commercial and recreational fisheries as a whole in the United States in 2019 resulted in $255 billion in sales and had a value of $117 billion, according to a study by NOAA Fisheries.

THE REIMAGINED trail cameras leverage a remote sensing method that uses light pulses on a computer chip to detect moving objects and measure distances with millimeter accuracy. The chips enable the new trail cameras to trigger on small animals by providing a new way for computers to perceive their environment.

In addition to the new trigger technology, the reimagined trail cameras can generate spreadsheets of weather data, have free long-distance wireless connections and interchangeable lenses.

“It’s all these features that scientists need that are not part of big game hunting trail cameras,” Bonham said.

For some creatures, humans can provide monitoring, but as Bonham points out that’s disruptive to animals, expensive and time-consuming. Basically technology makes the process better and more efficient.

Not only do the trail cameras allow for the study of small creatures, they also employ artificial intelligence to assist in organizing and analyzing that data. The camera can pick out what kind of lizard a scientist is looking for, or be set to only take pictures of butterflies.

“That decreases the amount of data,” Woodman said. “If you have a dumb camera and you’re trying to capture that butterfly by taking a picture once every minute for a month and you have a large number of cameras you could be easily looking at millions of images.”

Then the scientist is left with an amount of data that becomes overwhelming to try to sift through.

The new chips also allow the cameras to operate using much less battery power which is critical in remote areas and those that may not be able to rely on solar power.

“It can be hard to [find] existing tools for this kind of science because it’s not built for that and we’re trying to build precisely for the needs of wildlife management — those needs are the same whether you’re a property owner with a business background or you’re a botanist or an ecologist, your needs are very similar.”

THE NEW cameras are as complex as a laptop so challenges still lie ahead in further development as they work to fine-tune the technology and prepare for production.

“The scale-up production of a complex piece of hardware is a far more challenging thing,” Bonham said. “The concept is good and we’ve got a passionate team so we’ll get there.”

While both Bonham and Woodman began improving trail cameras because of a mutual interest in studying birds, they say by making the cameras work to study the most challenging creatures — insects and fish — it will make the cameras viable for studying any smaller creature.

“This is an excuse to push technology,” Woodman said. “We could have used our earlier models of the camera for birds, but we want our newer model to blow that out of the water.”

They see the impact of the cameras as far-reaching by making them available for large-scale studies that can provide reams of scientific data in a small, affordable way. The cameras could also be used in schools and by citizen scientists as a way to broaden the reach even further.

“We’re at a tipping point for managing a lot of species and environments and the sooner we get the data and sooner we make those decisions the more likely we are to protect the industry and the people and the communities that depend on the ecosystems, the animals and the crops,” Woodman said.

Features Editor Heidi Desch may be reached at 758-4421 or hdesch@dailyinterlake.com. 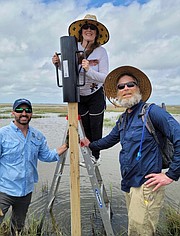